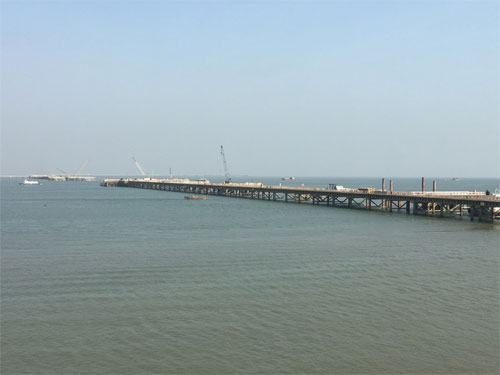 Construction of the gigantic project, Shenzhong Link, is being accelerated and is expected to be completed and open to traffic by 2024. The bridge and sea tunnel structure links the major cities in the eastern part of the Pearl River delta to the prosperous cities in western part. [Photo by Zheng Caixiong/chinadaily.com.cn]

Construction of a major infrastructure project that runs across the Pearl River estuary to link Shenzhen special economic zone to Zhongshan city is being accelerated and is expected to play an important role in expanding cooperation and exchanges among cities in the Guangdong-Hong Kong-Macao Greater Bay Area in the future.

Shenzhong Link, which costs more than 44.69 billion yuan ($6.38 billion), links the city clusters of Shenzhen, Dongguan and Huizhou in the eastern part of the Pearl River Delta to the prosperous cities of Guangzhou, Zhuhai, Foshan, Zhongshan, Jiangmen and Zhaoqing in the western part, strengthening the infrastructure connectivity in the Greater Bay Area.

The 24-kilometer-long mega project that includes a 6.8-km sea tunnel, a 17.2-km bridge above the sea and two artificial islands connects together Guangdong's three pilot free trade zones of Qianhai in Shenzhen, Nansha in Guangzhou and Hengqin in Zhuhai.

Song Shenyou, deputy director of the Shenzhen-Zhongshan Link Administration Center and chief engineer of the gigantic project, said it will take only about 30 minutes for vehicles to complete the journey from Zhongshan to Shenzhen when the eight-lane structure is completed and traffic starts in 2024.

Now it takes about two hours for drivers to complete the journey via Humen or Nansha bridges, which have witnessed heavy traffic jams during peak periods, he said.

Shenzhong Link is about 38 km away from the Hong Kong-Zhuhai-Macao Bridge that started traffic about a year ago and another 30 km away from Humen Bridge in its north. It is linked to the advanced expressway network in Guangdong province, the window of China's reform and opening-up.

The project is designed to have a lifespan of more than 100 years.