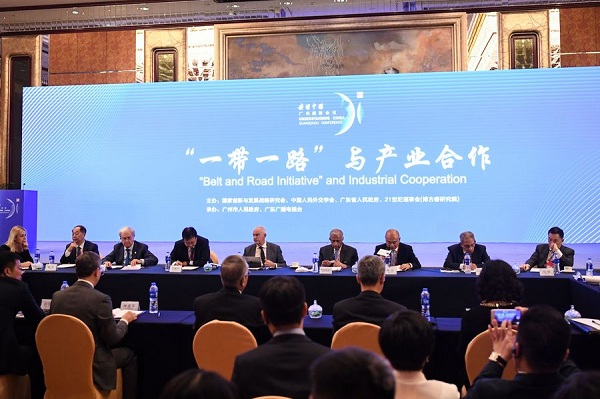 Six years on, the China-proposed Belt and Road Initiative (BRI) has brought tangible benefits to participating countries through strengthened cooperation and is highly applauded internationally.

On Saturday, politicians, experts and entrepreneurs from around the world spoke highly of the fruitful results of the initiative and called for deeper cooperation among countries along the Belt and Road, at a parallel forum of the fourth Understanding China Conference that opened the same day in the southern Chinese city of Guangzhou.

"The initiative has received international support," said Rashid Alimov, former secretary-general of the Shanghai Cooperation Organization, crediting the BRI's aim to "involve all those who seek joint development."

Shaukat Aziz, former prime minister of Pakistan, shared similar views. "The BRI is a game-changer for countries like Pakistan."

"Thanks to the BRI, we have a new port and domestic trains have also been improved. The initiative comes with development in areas including infrastructure, financing and after-sales service," he said, adding that hundreds of people have found jobs because of the BRI and more ships have started to come to his country.

Aerial photo taken on Sept 20, 2019 shows a view of the Lower Sesan II hydroelectric power station at Sesan District of Stung Treng Province, Cambodia. The Lower Sesan II hydroelectric power station, born of cooperation between Cambodia and China under the framework of the Belt and Road Initiative, was inaugurated in December 2018. With a length of 6,500 meters, the 400-megawatt dam is the largest and the seventh one built by China in Cambodia. [Photo by Chen Gang/Xinhua]

So far, China has signed cooperation documents with more than 160 countries and international organizations on the initiative. With the fast growth of the BRI, China has boosted market-oriented cooperation with relevant countries to upgrade their industrial structure.

Through the construction of the BRI, East Africa has its own expressway, the Maldives has its first inter-island bridge, Belarus can produce sedans and the number of freight trains between China and Europe is on the rise. The once rusted Greek port of Piraeus has now become one of the world's fastest-growing container terminals.

"The Piraeus project is a prosperous model of the BRI," said George Papandreou, former prime minister of Greece, adding that the initiative is a key project of Sino-Western cooperation and also provides a way to change the structure of global governance.

"It brought us a shared society, shared prosperity and shared future," he said.

Over the past years, the BRI has been extended from Asia and Europe to Africa, the Americas and Oceania, with the collective action unprecedented in history.

"The initiative has linked China extensively with its neighbors," said Kishore Mahbubani, a distinguished fellow at the Asia Research Institute of the National University of Singapore.

With strengthened cooperation, more economic dividends will be seen in BRI countries, he added.

From 2013 to 2018, the trade volume between China and other countries along the Belt and Road surpassed $6 trillion and China's investment in those countries exceeded $90 billion.

"Though proposed by China, the opportunities and achievements brought by the BRI are shared by the world," said Zhao Ai, executive vice president of the China Society of Economic Reform.

"The cooperation among BRI countries has opened up new space for world economic growth, built a new platform for international trade and investment and contributed to the improvement of the global governance system," he said.